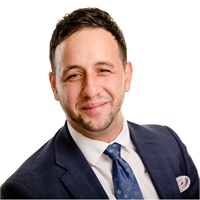 Tarek joined Lee, Nolan & Koroghlian, LLC in 2020, with nine years of industry experience.  He began his financial services career as a financial professional with American Income Life before being promoted to a Supervising Agent, six months later, and becoming a General Agent within two years.

Tarek quickly found his way in to the top three managers recognized nationally for development and retention, and oversaw six satellite offices in New York, while also being recognized as a top producer personally.  Following his time with American Income Life, Tarek became an Associate Partner with New York Life, and then moved on to Guardian, where he oversaw the New York City and Melville offices.

Tarek earned an Associates Degree in Civil Engineering from Queensborough College and a Bachelors Degree in Mechanical Engineering from Vaughn College of Aeronautics and Technology in Flushing, NY.  The Astoria native has a strong sense of community, which keeps him involved in various philanthropic endeavors, including being on the board of the Daniel Copersino Foundation. He also takes pride in his ability to bring people and resources together and likes nothing more than helping new associates build successful careers in the industry.  Tarek loves music and spending time with family. He now resides in Whitestone with his wife, Maria and son, Vincent.